Why we don’t take our own career advice

30 Apr Why we don’t take our own career advice

Posted at 15:54h in Mentions, Press in English by adminis
Share 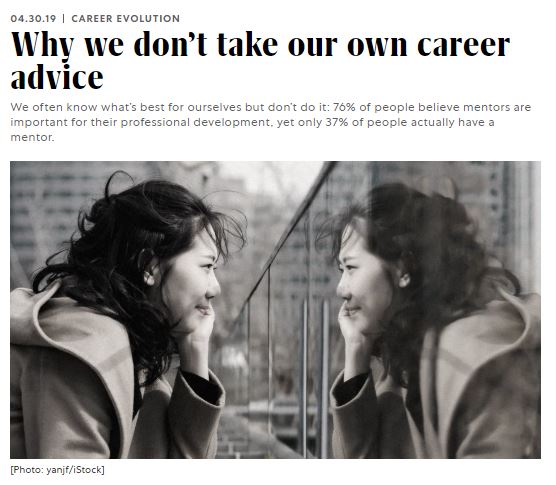 Whether it’s the value of a good mentor, the benefits of self-employment, or guarding against career disruption, a majority of American workers know what’s best for their careers, yet they rarely take their own advice.

A recent survey of 3,000 American workers by Olivet University and Digital Third Coast found that 76% of respondents believe mentors are important for their professional development, yet only 37% have one.

A 2018 study by FreshBooks also found that 27 million Americans aspired to work for themselves by 2020, but a year later, the 2019 edition found that only 2 million had made the leap. Furthermore, multiple studies by Gallup, Quartz, and the Pew Research Center have shown that a majority of Americans believe automation and AI will displace a significant number of jobs, but not their own.

These studies and others demonstrate how we often know what’s best for ourselves and for our careers. So why don’t we take our own advice?

“We don’t do it because it requires changing our habits and routines, and creating uncertainty and disturbance in our lives, and we don’t want that,” suggests Ines Temple, a career transition coach and the best-selling author of You, Incorporated. “It’s like going to the gym; you know it’s good for you, but unless you’re in a habit, it’s hard to keep making the decision to go.”

THE BIGGEST THREAT TO A SUCCESSFUL CAREER IS COMFORT

According to Temple, comfort with the status quo might be the biggest threat to our career trajectory. She explains that the security of a monthly or biweekly paycheck is often enough to make us take our employment for granted.

Instead, Temple says many only consider these possibilities after they become reality. “We can be reactive and try and do things when we have to, or we can make big shifts in the way we understand our work situation and really become the owner of our own careers,” she says.

WHY WE’RE TERRIBLE AT PLANNING FOR THE FUTURE

The only problem with planning ahead is that humans are naturally really bad at it. In fact, Harvard psychologist Daniel Gilbert published an op-ed in the Los Angeles Times in 2006 titled, “If Only Gay Sex Caused Global Warming,” to demonstrate how we are wired to effectively respond to short-term problems but remain remarkably poor at planning for the future.

“We have learned to react to things that are urgent, but unless there is something pushing us, we don’t move,” says Temple. “We don’t want to look ahead in time, and that’s why people don’t take mentors.”

Temple explains that finding a mentor can dramatically improve our career resiliency, but it requires an acceptance that there is room for improvement and a willingness to ask for help; two things humans are particularly bad at.

“If you don’t feel a glaring need–like, ‘I really need some advice or some guidance in my career right now‘–but just vaguely know it’s important in general, that might not be enough to compel people to go and pursue it, because it’s harder than the status quo,” explains Andy Kerns, the creative director of Digital Third Coast.

In their study, Digital Third Coast also discovered that only 14% of mentees directly asked their mentor for assistance, while 25% of mentors offered up their services, and the remaining 61% say that the relationship developed naturally.

“Clearly, the working public is timid about asking someone to be their mentor,” says Kerns. “It’s clearly a rarity for someone to take the initiative and ask for that relationship.”

It’s that same fear, uncertainty, and doubt that prevents many from pursuing self-employment, even when they feel it could improve their income and level of career satisfaction. According to the FreshBooks study, only 1 in 5 employees is standing by their current employer out of loyalty. The remainder of those who want to pursue self-employment but haven’t cite fear of income inconsistency and fear of losing benefits as the top reasons why.

“Because of imposter syndrome, we often don’t think we’re as qualified as we might be,” says Mike McDerment, the CEO and cofounder of FreshBooks. The study also found that women tend to be even less confident in their qualifications and expertise.

“Newly self-employed people–and women in particular–have trouble charging what they’re worth, which makes it difficult to be successful,” adds Dave Cosgrave, the director of industry insights and analytics for FreshBooks. “That’s an important manifestation of the psychology of imposter syndrome; you’ve got to get over the fact that you are good enough and you need to charge what you’re worth.”

Whether you’re looking to find a mentor, take the leap into freelancing, or pursue additional training that might improve your job security, the hardest step is often the first one.

Kerns suggests searching LinkedIn and other industry-specific sources to help identify and start reaching out to those in your field that are in a position you aspire to. “I don’t think there’s much to lose in seeking a mentor, or at least opening up the conversation,” he says.

McDerment, meanwhile, recommends seeking out those first few freelance gigs and trying it out part-time to help determine whether it’s a viable career option.

“It’s not a zero to one kind of thing,” he says. “You can take a little step and build up to it, which can help with the fear, uncertainty, and doubt.”

When This is All Over

Original Spanish version published in  El Comercio newspaper on April 26, 2020 When this is all over, and it will be, many people will come out of it transformed. The crisis will have served to discover their true character, their grit and inner strength. And with that…

Being authentic requires showing yourself as you really are. It requires checking your ego at the door and not looking down on anyone. It requires courage and self-confidence, but also honesty and tact to “tell it like it is.”